Rock’n’Malta are proud to present Summer 2019’s reggae concert with two legendary bands; Third World and Inner Circle who will be performing live in Malta at Aria Complex on Friday 14th June 2019.

‘Reggae Ambassadors’, THIRD WORLD is one of the longest-running reggae bands of all time with 10 Grammy nominations under their belt. With sound influenced by soul, funk and disco the Jamaican reggae Platinum fusion band have a catalogue of charted smash hits including “Now That We Found Love”, “96 Degrees in the Shade” and “Try Jah Love”. 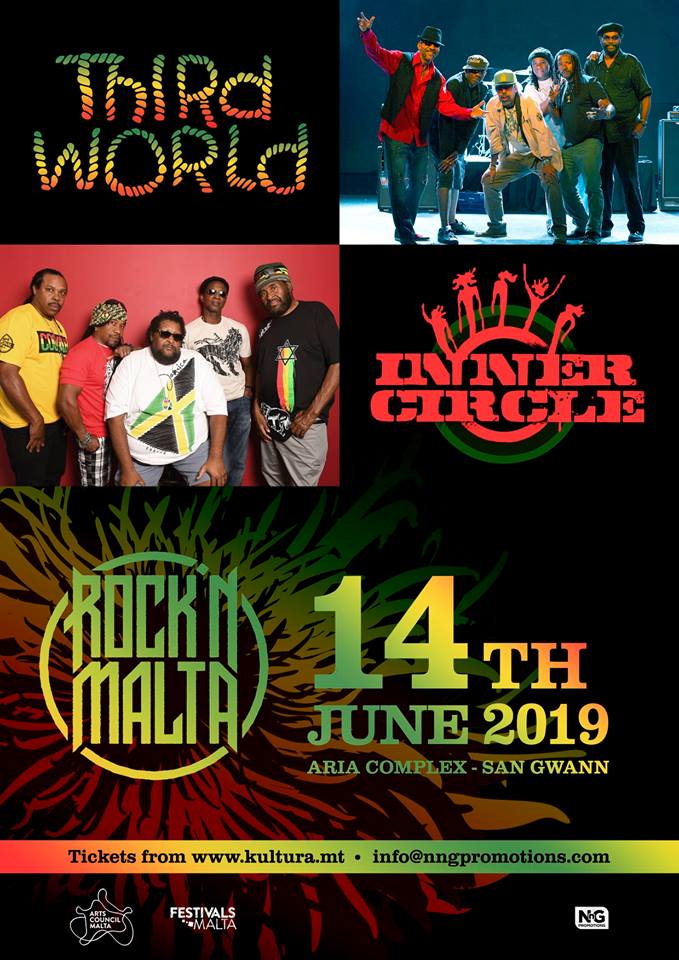 Also headlining the concert, Inner Circle is one of the world’s most respected reggae groups with a long string of successes stretching back to the mid-70s. This Jamaican bred, Grammy award winning quintet are most well-known for their special blend of pop-oriented Jamaican beats and pop energy that has made them the leading stars of their movement. Inner Circle plays at many of the world’s largest music festivals, headlining alongside such towering pop and rock music icons as Elton John, Van Morrison, Jimmy Page, Robert Plant and many others.

Fans can expect the best of their repertoire including hit album “Everything Is Great,” popular singles “Mary, Mary”, “Music Machine’’, Grammy Award winning “Bad Boys” named #1 most played reggae song of all time and “Sweat (A La La La La Long)’’, all singles which topped the charts in several countries around the globe.

Tickets are available from https://www.kultura.mt/event/333

The band started out playing casual acoustic jams on malteses beaches in 2010. After winning the Rookies and the Hard Rock Cafe battles of the band in 2013, Mana Tapu grew into the outfit that was responsible for some pretty memorable gigs in summer.

An finally our dream came true .. That of playing

What a night at @nottebiancavlt Thank you all for